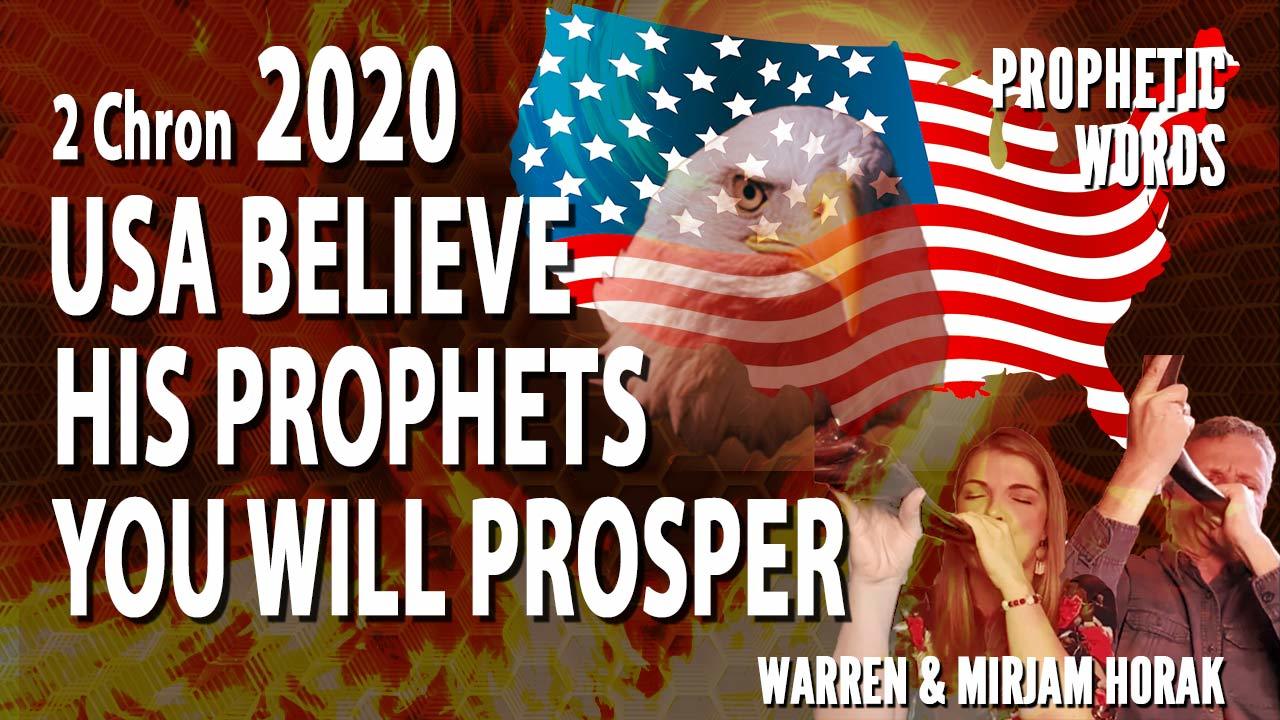 USA Believe His Prophets You will Prosper

The Lord speaks His word the devil challenges His word - we have to believe His word!

Only believe - believe His prophets, and you shall prosper.” 2020

He has a plan of action for the Church right now.

This is a very important word and strategy for the Watchmen across the nations.

2 Chronicles 20:2–4 Then some came and told Jehoshaphat, saying, “A great multitude is coming against you from beyond the sea, from Syria; and they are in Hazazon Tamar” (which is En Gedi).

3 And Jehoshaphat feared, and set himself to seek the LORD, and proclaimed a fast throughout all Judah.

4 So Judah gathered together to ask help from the LORD; and from all the cities of Judah they came to seek the LORD.

2 Chronicles 20:20–23  So they rose early in the morning and went out into the Wilderness of Tekoa; and as they went out, Jehoshaphat stood and said, “Hear me, O Judah and you inhabitants of Jerusalem: Believe in the LORD your God, and you shall be established; believe His prophets, and you shall prosper.”  2020

21 And when he had consulted with the people, he appointed those who should sing to the LORD, and who should praise the beauty of holiness, as they went out before the army and were saying: “Praise the LORD, For His mercy endures forever.”

22 Now when they began to sing and to praise, the LORD set ambushes against the people of Ammon, Moab, and Mount Seir, who had come against Judah; and they were defeated.

Only believe - believe His prophets, and you shall prosper.”  2020

Make war with the promises and words of prophecy given to His prophets - Sadhu, Veronica West, James Goll, Tracy Cook, Kevin Zedai, Kat Ker and many others.

The Lord said that, Trump will Triumph via Veronica West and Sadhu.

19 When anyone hears the word of the kingdom, and does not understand it, then the wicked one comes and snatches way what was sown in his heart. This is he who received seed by the wayside.

20 But he who received the seed on stony places, this is he who hears the word and immediately receives it with joy;

21 yet he has no root in himself, but endures only for a while. For when tribulation or persecution arises because of the word, immediately he stumbles.

22 Now he who received seed among the thorns is he who hears the word, and the cares of this world and the deceitfulness of riches choke the word, and he becomes unfruitful.

23 But he who received seed on the good ground is he who hears the word and understands it, who indeed bears fruit and produces: some a hundredfold, some sixty, some thirty.”

Revelation 12:15–16 So the serpent spewed water out of his mouth like a flood after the woman, that he might cause her to be carried away by the flood.

16 But the earth helped the woman, and the earth opened its mouth and swallowed up the flood which the dragon had spewed out of his mouth.

Taking Dominion Based on His Will and Purpose

Software has been written that can steal the election called dominion -

Are we as believers not supposed to have dominion?

5 For You have made him a little lower than the angels, And You have crowned him with glory and honor.

6 You have made him to have dominion over the works of Your hands; You have put all things under his feet,

Luke 10:19 “Behold, ﻿﻿I give you the authority to trample on serpents and scorpions, and over all the power of the enemy, and nothing shall by any means hurt you”

Revelation 17:12–14 “The ten horns which you saw are ten kings who have received no kingdom as yet, but they receive authority for one hour as kings with the beast.

13 These are of one mind, and they will give their power and authority to the beast.

14 These will make war with the Lamb, and the Lamb will overcome them, for He is Lord of lords and King of kings; and those who are with Him are called, chosen, and faithful.”

In His Awesome love

Complaining will keep you in the wilderness