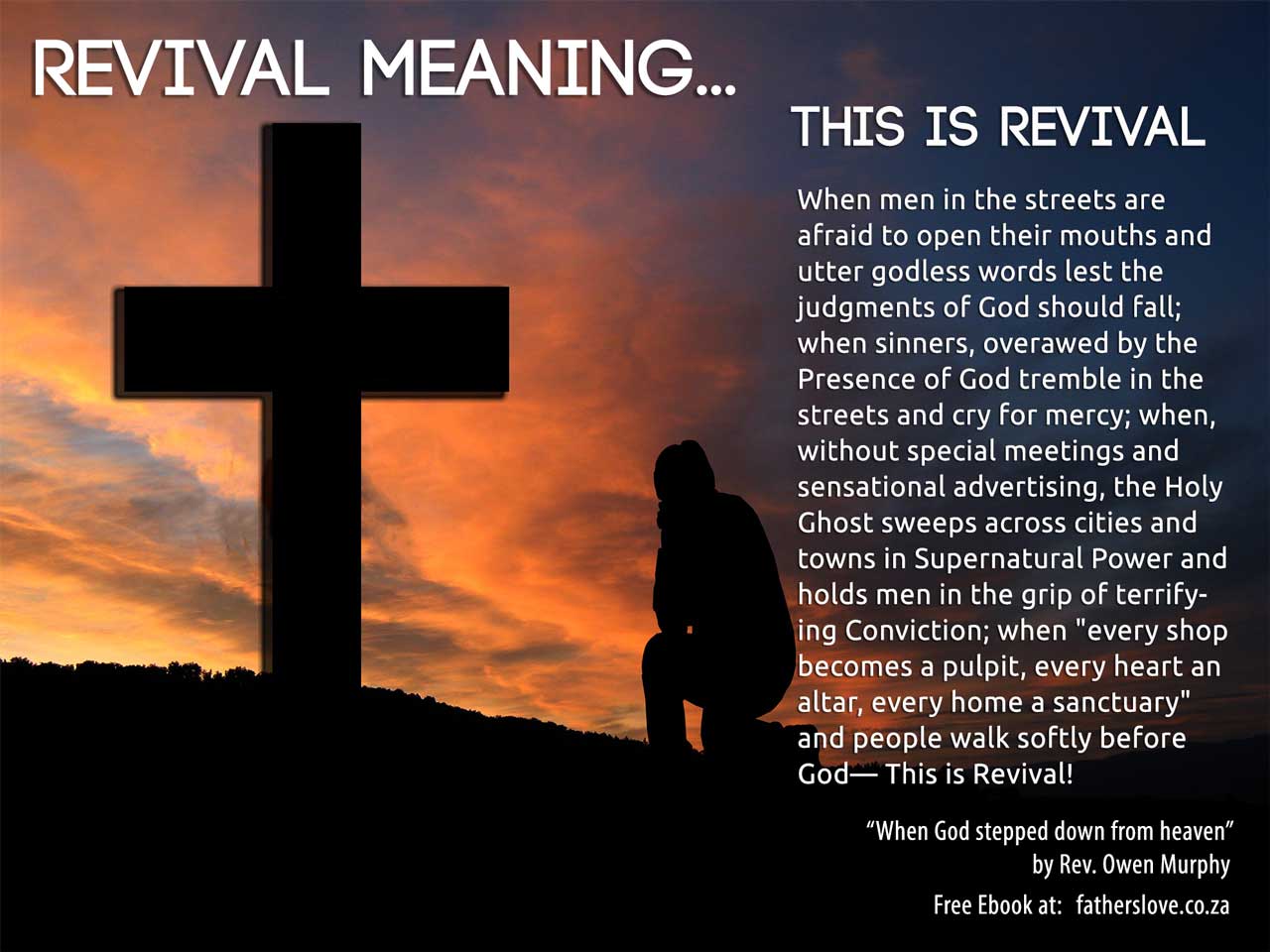 When men in the streets are afraid to open their mouths and utter godless words lest the judgments of God should fall; when sinners, overawed by the Presence of God tremble in the streets and cry for mercy; when, without special meetings and sensational advertising, the Holy Ghost sweeps across cities and towns in Supernatural Power and holds men in the grip of terrifying Conviction; when "every shop becomes a pulpit, every heart an altar, every home a sanctuary" and people walk softly before God—This is Revival!

Today the word Revival has largely lost its real meaning. Our present generation, never having witnessed the mighty movings of God in nation-wide spiritual awakening such as has taken place in past generations, has little conception of the magnitude of such a "visitation."

REVIVAL is confused with EVANGELISM!

Heaven-sent revival is not religious entertainment where crowds gather to hear outstanding preachers and musical programs; neither is it the result of sensational advertising—in a God-sent revival you don't spend money on advertising; people come because Revival is there!

Revival is an "awareness of God" that grips the whole community, and the roadside, the tavern, as well as the church, becomes the place where men find Christ.

Here is the vast difference between our modern evangelistic campaigns and true revival. In the former, hundreds may be brought to a knowledge of Christ, and churches experience seasons of blessings but as far as the community is concerned little impact is made; the taverns, dance halls, and movies are still crowded, and godlessness marches on. In revival, the Spirit of God like a cleansing flame sweeps through the community.

Divine conviction grips people everywhere; the strongholds of the devil tremble and many close their doors, while multitudes turn to Christ!

Enjoy powerful videos and books all about revival.

For I will pour water on him who is thirsty,

And floods on the dry ground;

I will pour My Spirit on your descendants,

And My blessing on your offspring. Isaiah  44:3

They Told Me Their Stories

The Revival On The Isle Of Lewis - Awesome account of what happens in a true revival!

Off the west coast of Scotland is a small group of islands called the Hebrides. Between 1949 and 1952 a wide spread revival swept through these islands in answer to the prayers of God's people.

Instrumental in this revival was the evangelist Duncan Campbell and two elderly intercessors sisters Peggy and Christine Smith.

Duncan Campbell came to the Isle of Lewis to conduct a two week evangelistic campaign and ended up staying two years.

This is his personal account of what happened. In a small cottage by the roadside in the village of Barvas lived two elderly women, Peggy and Christine Smith.

They were eighty-four and eighty-two years old. Peggy was blind and her sister almost bent double with arthritis. Unable to attend public worship, their humble cottage became a sanctuary where they met with God.

To them came the promise:

"I will pour water upon him that is thirsty and floods upon the dry ground,"

they pleaded this day and night in prayer.

One night Peggy had a revelation, revival was coming and the church of her fathers would be crowded again with young people!

This video starts at 22 minutes if you want to listen from the beginning then you can drag the player pointer to the beginning.

The reason we are releasing these Chronicles is to honour the Lord for what He has done in the past and to say to Him "Do IT AGAIN Lord!"

What He has done in the past He wants to do again, but this time on a much higher level.

The supernatural glory that was released through Willie's ministry will be released again. This time the Lord wants to release His glory not just over one Church but entire cities and regions.

Let your faith arise as you listen and ask Father to do it again… in Cape Town and in your City and nation.

Trending
All time
Recent
The Fire In You Is Greater Than The Fire Around You 0 comments
Prophetic Word for 2018 8 comments
Kingdom Business Planning – Follow Me 8 comments
Poverty Is Like A Cancer – Follow Me – Part 2 6 comments
Using Your Stones to Make Way | Accessing Our Inheritance Through TPW | Part 10 4 comments
Psalm 100 Your Heavenly Cheque – Accessing Our Inheritance Through TPW 4 comments
Babies Get Anointed In The Valley – Webinar #26 4 comments
Why Is It Taking So Long? 4 comments
Accessing Our Inheritance Through TPW Thanksgiving Praise and Worship – Part Seven 4 comments
From Roots to Fruits – My Hebrew Roots Journey 3 comments
The Blood Soaked Eagles 3 comments
Are You Seeing Jesus Daily? Three Simple Steps to a Divine Encounter 3 comments
Prophetic Soaking by Graham Cooke – The Nature of God 3 comments
The Fire In You Is Greater Than The Fire Around You 25 May, 2020
Doctors Do Not Look to Truth They State The Facts 24 April, 2020
Revival in Africa Sadhu 3 January, 2020
Gods Word for South Africa Concerning the Mountain of Crises 13 December, 2019
Prayer for Education in South Africa 26 November, 2019
The Scroll of Restoration 24 November, 2019
Every High Thing Must Come Down 20 November, 2019
Prayer for a Community Revival 30 October, 2019
The Fabric of Revival 17 October, 2019
War Room 18 September, 2019
Buying Time With God 31 August, 2019
Kingdom Finances | Spirit-inspired Giving Will Bear Fruit | Part 2 21 August, 2019