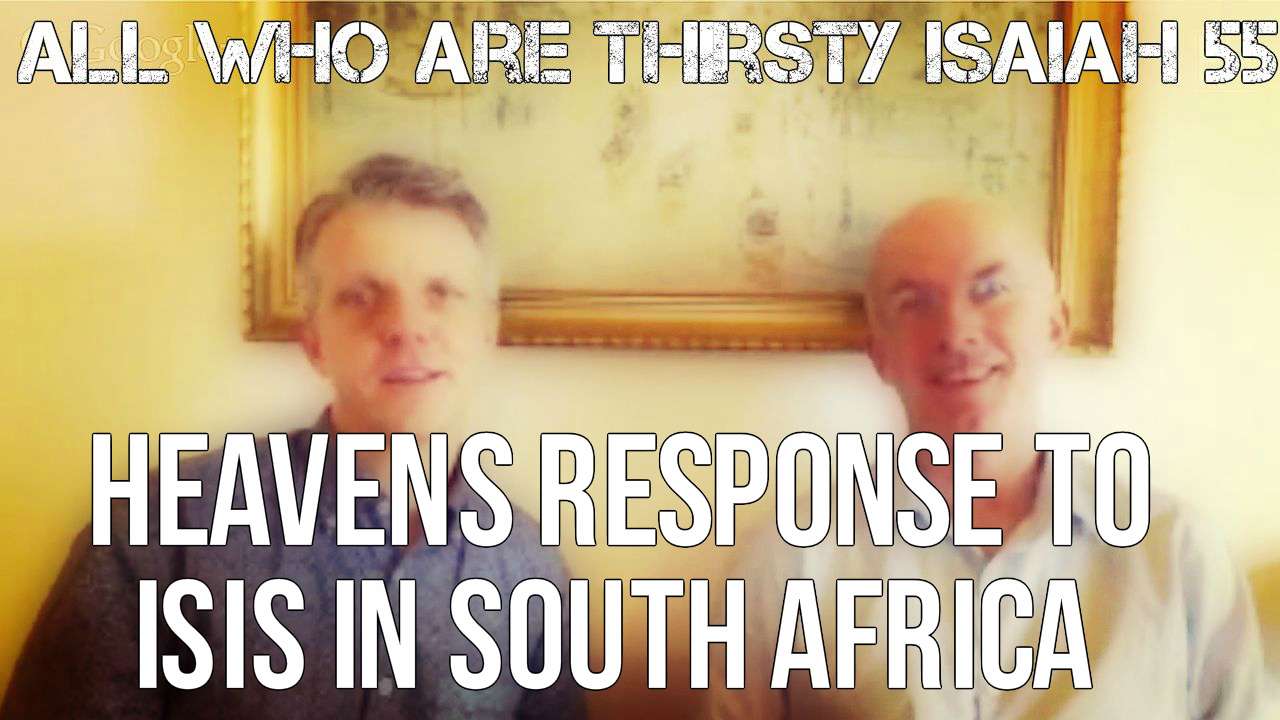 I am sure you have noticed that there has been a virus that has been going around, that releases fear and hopelessness which is spread by the media and by many Christians. The virus consists of fear and is carried by the free publicity given to the abominable acts of isis.

I was perturbed by the number of times I got the same message via whatsapp and or email via the Body of Christ. Most messages said pray urgently and the message body was focused on how isis was buying up farms in South Africa as training camps etc.

The moment I read it for the first time, I was grieved as I knew this message carried the spirit of fear designed and released by the enemy. Later Mirjam and I discussed this and prayed over it.

What must our reaction be to hearing the enemies plans?

We believe that we need to stand against the spirit of fear as never before, as this is one of the end time signs. We are warned by the Lord that if we focus on end time events on earth we will fall into fear our hearts will fail, as we focus on the all the disasters on the earth. The nations will be confused and perplexed as these event unfold when God shakes the heavens.

“And there will be signs in the sun, in the moon, and in the stars; and on the earth distress of nations, with perplexity, the sea and the waves roaring;
26 men’s hearts failing them from fear and the expectation of those things which are coming on the earth, for the powers of the heavens will be shaken.
27 Then they will see the Son of Man coming in a cloud with power and great glory.
28 Now when these things begin to happen, look up and lift up your heads, because your redemption draws near.” Luke 21:25-28 NKJV

He admonishes us the look up, for our redeemer is drawing near.

It is in the time or great terror that our beloved Redeemer will draw near and deliver us from ALL our fears.

We need to always know that there are two plans for our nation. There is God’s blue print in heaven and then there is satan’s plan of destruction.

We must choose daily which plan we want and then seek after it with all our hearts. If we want Gods plan we need to spend time in heaven seeing what He is doing and saying about our nation.

The Lord has taught us not to forward the plans of darkness and fear. If we do we only strengthening the enemies plans, which are all based on fear, unbelief and doubt.

We as the Lords watchmen and eagles are called to watch and wait on the Lord. If we see the enemies plans, we are to first report this to the King Who is the Lord of Armies of heaven. He already knows these plans and plots, He is not taken by surprise in this war.

When we present it to Him, we can simply say that this is not Your plan Lord, please show us Your plan and blue print concerning this issue in our city and nation.

This is where we need the grace and diligence to wait on Hmi and go higher in the Spirit to get His blue print for our nation.

After these things I looked, and behold, a door standing open in heaven. And the first voice which I heard was like a trumpet speaking with me, saying, “Come up here, and I will show you things which must take place after this.” Revelation 4:1

If we don’t fly higher we will only get visions and dreams and words about what the satan is doing and not see and hear what Jesus our Captain is doing in heaven.

We are in great danger if believers just share and forward these messages of fear as we contributing to the problem and are actually helping the enemy establish His stronghold of fear.

A diligent watchman will not allow the enemies words to move forward, instead a watchman will take every thought, word, email and text message that is not in line with heavens words and plan and bring into obedience to Jesus.

We must surrender these words and plans at His feet until He speaks to you and reveals heavens plans.

When we do this then we will stop the enemy’s plans from going viral.

When the Lord warns us of the enemies plans, He will always show us the solution and the way out as He is love and light and has overcome all darkness on earth. He is not intimidated by any of His enemy’s plans. He is our victorious conqueror, we are now more than conquerors through Him.

We have nothing to fear, as His perfect love casts out all fear.

Even death cannot intimidate us if we have died with Him, we shall live with Him and reign with Him. The time to reign is now! His Kingdom is invading this earth. Jesus is coming back to take the entire planet back from the devil and the forces of darkness for 1000 years.

This is our future; not the anti Christ and the new world order. Gods Kingdom on earth is Gods plan, this should be our focus.
Before this happens the world will see His glory cover this earth as waters cover the sea. Let us occupy until He comes, and He removes all of satan’s forces from this earth.

So what heavens response to isis?

In this previous webinar the Lord showed Mirjam that as we worship Him in small groups the Lord releases these large angels.

These angels are putting the nations together.

The pieces for the nations were been shifted into position by these angels. Then God’s blue prints are busy being released from heaven as we worship Him.

Together your worship holds the key for transformation in the nation.

To listen to the complete message Mirjam got in audio recording below.

“get them to agree with what I say”

He was drilling his demons to action this.

The enemy is seeking to build strongholds, these strongholds were small and were made and moving with words. The bricks were made out of words, fear, depression, worry etc.

The enemy is seeking to establish strongholds all over the nation as much as he can.

Mirjam was not happy with just hearing the enemies plans so she pressed in and worshipped some more. Then she saw something awesome

He is establishing strongholds of worship

Saw them being built all over the country.

Saw these soldiers, for every soldier there was a whole row of 100 angels or more behind then. Theses soldiers were the worshippers.

It is very easy to repeat what the enemy is saying. As the enemy has commanded his demons to get the Christians to agree with what he is saying….

Neil saw the Lord downloading revelation onto the staff that the Lord has given each of us.

We will get this revelation as worship the Lord.

This is now the time to worship God and release heaven on earth, isis is not taking over the nation.

Watch the entire webinar where the Lord gave us words for Israel, for women in the Middle east and many words on overcoming fear.

Over to you, has the Lord given shown you some of His blue Print for your city and nation?