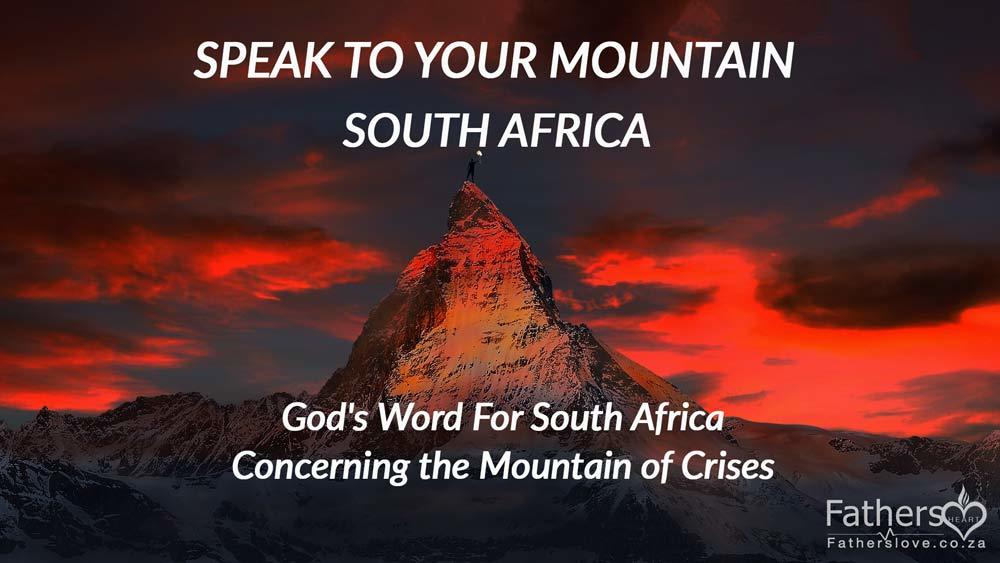 Speak to Your Mountain South Africa

God's Word For South Africa Concerning the Mountain of Crises

By Warren and Mirjam Horak

Watch the video below with the entire message

Quick Navigation
Prayer over South Africa in crises addressing the Clicks and EFF issue
Intercessors Raising Their Shields Around the Borders of Africa - Prophetic Words - Mirjam Horak
We as believers have the answer to this mountain of issues.
What does Jesus say about mountains?
Three things the Lord wants believers to do in South Africa
Why do we make Decrees and Proclamations?
Prayer
The Prayer of Agreement and Now Faith:
Decrees and Proclamations over Violence, CSE, Eskom and Land Reform.
His presence released through a ROAR of TPW

The Lord has a message concerning Violence, CSE, Eskom, Land Expropriation and many other serious national issues that South Africa is facing at this time.

We are facing a national crises in South Africa in other words a mountain of issues.

Like violent uprising and CSE which is a demonic sex education program for children in South Africa and Eskom which is battling with a major crises on top of that the whole issue of the amendment to the constitution.

How are we as believers supposed to address the mountains that we face as a nation?

We as believers have the answer to this mountain of issues.

Father has broken the drought in Cape Town one of the worst ever in our history, and now many other areas the drought has been broken!!!

He is well able. We must thank Him for these massive victories.

All things are possible if we would believe!

I am not going to discuss how bad all these things are… and what the results of these three issues hold for us as a nation.

We have to do what the Lord says we are too do.

We were praying earlier and Mirjam had a vision which confirmed what the Lord laid upon my heart a few days ago about speaking to the mountain in South Africa.

Here is the vision:

His Presence Melts The Mountain

Saw a tip of a mountain with a person on top.

The person had a torch in their hand.

The heat of the torch was causing the mountain to melt like wax from the top.

The mountain was governmental and national.

Saw people talking about the mountain and building it larger by what they were saying about it.

As they are talking, they were contributing to the problem and their negative words were not fixing anything.

What does Jesus say about mountains?

So Jesus answered and said to them, “Have faith in God.

For assuredly, I say to you, whoever says to this mountain, ‘Be removed and be cast into the sea,’ and does not doubt in his heart, but believes that those things he says will be done, he will have whatever he says

Therefore I say to you, whatever things you ask when you pray, believe that you receive them, and you will have them.

Now when He got into a boat, His disciples followed Him.

And suddenly a great tempest arose on the sea, so that the boat was covered with the waves. But He was asleep.

Then His disciples came to Him and awoke Him, saying, “Lord, save us! We are perishing!”

But He said to them, “Why are you fearful, O you of little faith?” Then He arose and rebuked the winds and the sea, and there was a great calm.

So the men marveled, saying, “Who can this be, that even the winds and the sea obey Him?”

Five things the Lord wants believers to do in South Africa

Why do we make Decrees and Proclamations?

In the armour that we read about in Ephesians chapter 6 we have the Sword of the Spirit. This is our proclamations we are supposed to use daily.

We create the atmosphere through our words. We create with our words as we are made in the image of God.

Faith is what pleases God. Faith is released when we speak in faith and believe in our hearts.

Everything God created was with His mouth. He believes and He speaks then it comes into existence.

We are created in His image and create our future by what we say as say what He says about our lives.

This is what we are called to do as sons and daughters of God.

A man's stomach shall be satisfied from the fruit of his mouth;

From the produce of his lips he shall be filled.

Death and life are in the power of the tongue,

And those who love it will eat its fruit

The Prayer of Agreement and Now Faith:

Decrees and Proclamations over Violence, CSE, Eskom and Land Reform.

Now let us speak to the Mountain of issues.

We now speak not about this national mountain, but we speak to it daily and command it to melt and to be no more…

Father, send Your hosts now to bring destruction on all the enemies plans for Education, Eskom and the Land.

Release the hosts to bring about these decrees on earth in our nation now in Jesus Name.

His presence released through a ROAR of TPW

We have prayed the prayer of faith!

When we praise the Lord in unity across South Africa, this will destroy and dissolve the witchcraft that the enemy has released against our nation.

Until we see the results we asked for. Then keep on praising Him….until all the mountain has melted and the giants have fallen in this nation.

The giants in South Africa will fall when we Thank Him - Praise Him - and Worship - TPW in Unity all over our nation.

Gather in two's three's or more or even if you are by yourself, wherever you are, just start to Thank and Praise and Worship God for answering our prayers of agreement.

When we praise Him He will fight for us like He did for Jehoshaphat in 2 Chronicles 20: 21-22

And when he had consulted with the people, he appointed those who should sing to the LORD, and who should praise the beauty of holiness, as they went out before the army and were saying:

“Praise the LORD, For His mercy endures forever.”

Now when they began to sing and to praise, the LORD set ambushes against the people of Ammon, Moab, and Mount Seir, who had come against Judah; and they were defeated.

The enemies of Israel destroyed each other. God will release confusion in the enemies camp when we Praise Him!

Let the ROAR of praise be released all over South Africa.

For the Lion of Judah(Praise) will arise and defeat our enemies in South Africa.

Let us come up His Mountain and release His presence over this national mountain.

The Claw of Racism Removed in South Africa

Praying the Blood of Jesus over South Africa