Vision given to Mirjam Horak 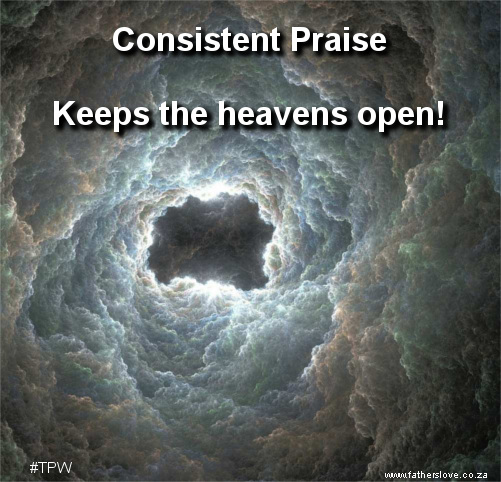 While reading the praise document, and asking the Lord what more happens when we praise Him, I saw that after the thanksgiving, where we open our hearts and He comes and blows all the “stuff” away, we have to start praising Him.

See that as we praise Him, the words of our mouth are going all the way up through heaven, through the five layers as our praises go higher.

As the words reach heaven, I again see them “drill a hole” in the heavens, and the more the praises go up and the more we press through in praising Him (consistent, hear the word consistent) the heavens continue to be open a lot longer.

If we want the heaven to stay open above our head, we must be consistent in our praises.

See this over the business, over the house, over individuals, the heavens will be open more and more if we keep praising Him in the very place (even physical) where we want and need breakthrough.

See the business with the heavens that are slightly open above it, see little holes above it, but it can be much more open, and the holes can be much bigger.

See that as the praises go up, the breakthrough will come down. 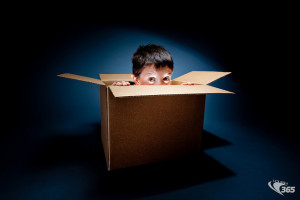 A big box doesn’t fit through a small opening.

The battle is decided in the second heaven realm

When Daniel was fasting and praying for revelation an angel was sent the moment he prayed but the angel with the answer to his prayers was resisted for twenty one days by the an enemy principality known as the prince of Persia. See Daniel 10:10-14.

We see that as the angels descend with the answers to our prayers from the third heaven the demonic forces in the second heaven realm resist these angels. There is an ongoing battle in the heavens above us.

Therefore, it is imperative for us to stand in faith and patience and to press through the second heaven with thanksgiving, praise and worship – the resistance is not form God but from our enemies.

Our objective is to open the heavens and keep them open. We do this through our faith and obedient worship.

The enemy is also referred to as the prince and power of the air.

And you He made alive, who were dead in trespasses and sins, 2 in which you once walked according to the course of this world, according to the prince of the power of the air, the spirit who now works in the sons of disobedience Ephesians 2:1-2

For we do not wrestle against flesh and blood, but against principalities, against powers, against the rulers of the darkness of this age, against spiritual hosts of wickedness in the heavenly places. Ephesians 3:12

Here we see that they operate in the heavenly places this is the second heaven realm.

We are called to be seated with Jesus in heavenly places, this is with Him in heaven to rule and reign over the earth.

We are called to even have dominion over these forces of hell that operate over our physical heads in the atmosphere and air above us on earth. Yet the battle is fought in the spiritual realm. Christ has given us the victory and authority to rise above the enemy and overcome them by faith in the work of the cross of Christ.

Heavenly places is our inheritance now

Since Jesus died for us He made a way for His children to ascend into heavenly realm through the darkness over this earth into heaven. All of His children are called to ascend into this realm by faith. This is why He said we are seated with Him in heavenly places not just when we die and go to heaven, but now while we are on earth.

Blessed be the God and Father of our Lord Jesus Christ, who has blessed us with every spiritual blessing in the heavenly places in Christ Ephesians 1:3

We are now in Christ in the heavenly places in the spirit realm. He is now seated at the right hand of His Father waiting for His Father to make His enemies his footstool. Note, all our blessings are with Him in heavenly place.

The only way to access our inheritance that is laid up in Christ in heaven is through obedience and faithful thanksgiving, praise and worship

which He worked in Christ when He raised Him from the dead and seated Him at His right hand in the heavenly places, 21 far above all principality and power and might and dominion, and every name that is named, not only in this age but also in that which is to come. 22 And He put all things under His feet, and gave Him to be head over all things to the church, 23 which is His body, the fullness of Him who fills all in all. Ephesians 1:19-22

We are His Body the Church, and we are seated with Him in heavenly places.

The way we ascend into this realm, is by faith in this word and by the power of the Holy Spirit and the blood of Jesus. When we do thanksgiving, praise and worship we are ascending through this darkness and into the heavenly realm where God dwells.

This is where our inheritance is as all we need is in Him.

Before we can truly penetrate the heavens we need to have our armour on as the war gets tougher as we ascend past the enemies in the second heaven realm. This is why there is so much resistance to true worship.

This creates portholes and opens heavens where we worship Him. The enemy will always seek to defile the air above our heads and keep it closed so that we are not able to worship our Father in spirit and truth.

The air above us is closed through fear, unbelief doubt, bitterness etc. This has been released by the nations and strengthens the principalities and powers that rule over most of the world. The reason that is so tough to break through is that the darkness has increased according to Isaiah 60:1.

It is through the portholes in the heavens where the angels ascend and descend with the answers of our prayers. Our praises determine the size and duration of the openings for the angels to move through with heavens resources.

What is interesting is that size of the porthole over our lives is determined by the consistency of our praises and which in turn influences the size of the box/gift that they can bring to us.

This truth has major implications on our lives every day whether we realise it or not. The bigger the opening the bigger the box that can get through.

A major part of our job now is to kept he heavens open so that Gods warring angels can release heaven on earth in and through our lives. Breakthrough is when heaven manifests on earth. Click to Tweet

Jesus has shown His disciples how to ascend into the heavenly realm through the open heavens above His head.

Jesus came to show us how to live in the supernatural dimension of the Kingdom of heaven.

And He said to him, “Most assuredly, I say to you, hereafter you shall see heaven open, and the angels of God ascending and descending upon the Son of Man.” John 1:51

Jesus was teaching us how to live in the dimension of the kingdom of heaven, which is an open heaven above our heads at all times.

John had learnt to ascend through the open heavens into the third heaven to see what Father was doing and saying.

After these things I looked, and behold, a door standing open in heaven. And the first voice which I heard was like a trumpet speaking with me, saying, “Come up here, and I will show you things which must take place after this.” 2 Immediately I was in the Spirit; and behold, a throne set in heaven, and One sat on the throne. Revelation 4:1-2

To ascend to our places in heaven we need the power of the Holy Spirit we need to be in faith and obedience. When we ascend then we can see what our Father and Jesus are doing in the heavens.

When we see clearly, then we can release this on earth through the porthole that has been opened through obedience and TPW.

Only those who worship Him in Spirit and truth will rule and reign with Him on earth.

Have you experienced opens heavens during this time?