How to be fruitful and never stumble – Part One

Exposed: The six thieves that rob your breakthrough

Click the player below, to play the audio of the teaching

Click here to go read and listen to Part 2 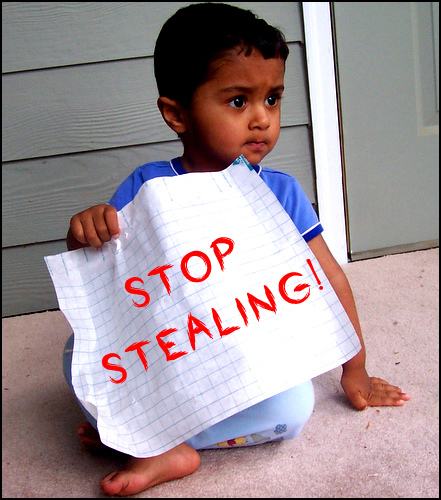 Many of us have been waiting for breakthrough for many years. We wonder why we haven't received breakthrough and have grow very weary and tired.

Many times we are waiting for the Lord as timing is key. However there is a time when God is waiting on us to grow up and mature and become like His Son. When we do, we will overcome and have our breakthroughs.

Imagine allowing six thieves into your house everyday and you never even knew that you were doing it.

Maturity is a prerequisite to Gods breakthrough for our lives! When we mature, we will overcome. Click to Tweet this

The sower sows the Word

Mark 4:9-17 And He said to them, “He who has ears to hear, let him hear!” 10 But when He was alone, those around Him with the twelve asked Him about the parable. 11 And He said to them, “To you it has been given to know the mystery of the kingdom of God; but to those who are outside, all things come in parables, 12 so that

‘Seeing they may see and not perceive,

And hearing they may hear and not understand;

Lest they should turn,

And their sins be forgiven them.’”

13 And He said to them, “Do you not understand this parable? How then will you understand all the parables? 14 The sower sows the word. 15 And these are the ones by the wayside where the word is sown. When they hear, Satan comes immediately and takes away the word that was sown in their hearts.

16 These likewise are the ones sown on stony ground who, when they hear the word, immediately receive it with gladness; 17 and they have no root in themselves, and so endure only for a time. Afterward, when tribulation or persecution arises for the word’s sake, immediately they stumble.

18 Now these are the ones sown among thorns; they are the ones who hear the word, 19 and the cares of this world, the deceitfulness of riches, and the desires for other things entering in choke the word, and it becomes unfruitful.

20 But these are the ones sown on good ground, those who hear the word, accept it, and bear fruit: some thirtyfold, some sixty, and some a hundred.”

The six thieves that rob your breakthrough

Six things that delay breakthrough in our lives

Six things that make us barren

Six things that keep us in the wilderness

Six things that block and stop Jesus working in our lives

These same six strongholds delay breakthrough, make us barren and keep us in the wilderness, out of the promises and goodness of God.

This barrenness can take on many forms in our lives. The very thing we are trusting God for is called fruitfulness. If we want to be fruitful then we must focus on the soil of our hearts each day. When the soil is right which is the condition of our hearts then we will see increase and blessing in our lives.

Unbelief occurs when we believe in something that is not true. Believing the devils lies is unbelief. The enemies entire army is bound by unbelief as they believe his lies over Gods truth, Jesus.

Just think of the history of Israel and how the enemy robbed an entire generation of their inheritance through unbelief, millions died in the wilderness not receiving their promises from God.

Surely this is a serious warning to us as the Church.

Mark 6:49-52 And when they saw Him walking on the sea, they supposed it was a ghost, and cried out;

50 for they all saw Him and were troubled. But immediately He talked with them and said to them, “Be of good cheer! It is I; do not be afraid.”

51 Then He went up into the boat to them, and the wind ceased. And they were greatly amazed in themselves beyond measure, and marveled.

52 For they had not understood about the loaves, because their heart was hardened.

Just before this Miracle of walking on water, Jesus took five loaves and two fish and fed five thousand men plus women and children, this was about twenty thousand people.

Matthew 13:18 “Therefore hear the parable of the sower: 19 When anyone hears the word of the kingdom, and does not understand it, then the wicked one comes and snatches away what was sown in his heart. This is he who received seed by the wayside.

When we are in unbelief we have an evil heart that is hardened by unbelief, this causes us not to understand the word that is spoken to us by Jesus. We need to understand through divine revelation in order for faith to grow in our hearts. See Matt 13:23

Unbelief blocks revelation as our hearts are hardened and cannot receive and understand Jesus’ words.

The word we heard is easily stolen from our hearts by the devil as it never took root.

Matthew 13:3 “Behold, a sower went out to sow. 4 And as he sowed, some seed fell by the wayside; and the birds came and devoured them.

Jesus later describes what makes our hearts hard and unreceptive to the word.

Mark 16:14 Later He appeared to the eleven as they sat at the table; and He rebuked their unbelief and hardness of heart, because they did not believe those who had seen Him after He had risen.

Wayside soil are people who have hard hearts due to unbelief. The type of soil is the condition of hearts.

The spirit of unbelief hardens the heart and causes the word not to be understood or revealed. The moment the seed germinates this is the time the Holy Spirit brings the revelation of the word.

The enemy is now able to steel the word from our hearts, because we never had a revelation of what God said.

This is why many sit week after week in church and never grow. They do not have “shamma ears” / “obedient ears”. They never came with faith to Gods word.

This is warning for us to guard our hears as proverbs tells us, “Keep your heart with all diligence, for out of it spring the issues of life”Proverbs 4:23

Stony hearts are people who have stones of offence and unrighteous judgment that stop the word taking root in their lives.

Matt 23 :37 O Jerusalem, Jerusalem, the one who kills the prophets and stones those who are sent to her!

Each offence we carry in our hearts towards others is a stone that will hinder Gods word producing a harvest of His goodness in our lives.

Each unrighteous judgement has the same effect; it makes us barren and delays our breakthrough.

The moment we carry offence toward others we judge them. These judgements are like stones in our hearts to hinder the word of Jesus taking root in our life.

These stones of offence and judgement now hinder Gods word taking root in us and when the heat of trials is on us, our growth is withered away as the plant cannot get enough water.

When trials come due to the word in their hearts they stumble and are offended and fall over these very stones of offence and judgements. They never removed the stones from their hearts not allowing Jesus’ word to take root in them.

So they are easily offended and do not know Gods love as love does not take offence.

Judas was offended at Jesus and later betrayed. Those who harbour offence in their hearts open the door to betraying those who they are offended with.

Cares of the world, deceitfulness of riches, desires for other things = The Thorny soil

We have the cares of the world we worry about our lives and things of this world, these worries choke and suffocate the very life that is in His word.

When we allow ourselves to be deceived by riches and worry about our income and rent, clothes and where we will live then this is what strangles Jesus in our hearts.

This is what satan sends to rob us through the principality of mammon. We see this clearly in Matthews 6, where we see that those who worry about money are worshipping and serving the spirit of mammon. This is the chief opposition for our worship of God.

When are walk in covetousness complain about what we have and lusting after things others have. Allowing greed to take over our hearts.

Desire for other things - Pleasures of life - The enemy sends in temptations to distract us from the most important thing in our lives and that is the Lord. Anything that eclipses our desire and love for God will choke His word in our lives.

When we can overcome these six thieves on daily basis by the power and grace of Jesus then we will be able walk into the promised land. In order to this we need eight specific things in our lives to make sure we are fruitful and never stumble.

In the next part we will look at the eight things that we need to be fruitful and never stumble. But first we must reckon with these thieves and cast them out of our lives.

Click here to go read and listen to Part 2

Father I ask you to expose each of these thieves in my heart and life and deliver me from each one.

Forgive me Father for the sin Unbelief, Offence, Unrighteous judgement, Cares of the world, Deceitfulness of riches, Lust for other things. Forgive me for being deceived by these thieves in my life and allowing them to steal Your inheritance from my family and I.

Have you encountered these thieves?

Have you got a testimony of overcoming these thieves?

Are you struggling with these thieves?

The Economic Shaking and The Coming Wealth Transfer – Part 7

The Economic Shaking and The Coming Wealth Transfer – Part 6

The Economic Shaking and The Coming Wealth Transfer – Part 5

The Economic Shaking and The Coming Wealth Transfer – Part 4

The Economic Shaking and The Coming Wealth Transfer – Part 3

How to be Fruitful and Never Stumble – Part Two