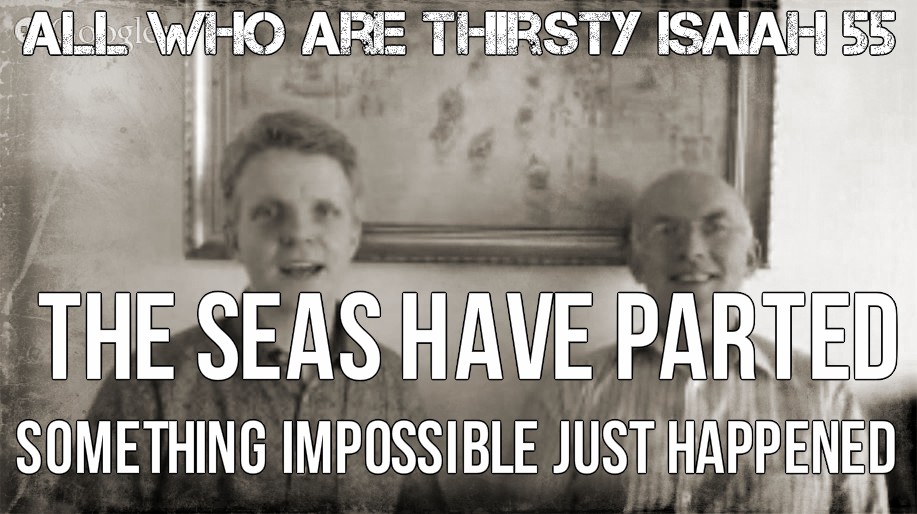 The Seas Have Parted and The Impossible Has Just Happened

If you find yourself in a “impossible situation” then please hold onto to you seat and find out just what the Lord wants you do to get through the darkness that is pressing you in.

As we were praising the Lord, I was in a dark pit and saw a huge man hole above us and water was flowing in over us. As we continued giving thanks, praising Him and worshipping, so the water of His love flowed over into the pit and onto us and brought us out of the dark pit.

Then I saw a view like the Israelites’ got when the sea parted. I saw the sea split open with waves pushing back.

The seas have parted and the impossible has just happened.

In this time of TPW it has happened.

Expect it because it has happened.

Look up and do loud TPW because it has happened.

No matter what your dark pit is, be it sickness, financial pressure, other major issues. He just was you to Look up Him and thank Him, Praise Him and worship Him. Because as you thank Him, so He releases the love that floats your boat.

When the flood came in Noah’s day as the judgements came down so Noah when up and all evil went down.

This is what I call the see-saw effect. As the judgments come down so God humbles the proud and exalts the humble. One goes down while the other goes up.

The humble are those who worship Him in Spirit and truth no matter how hard life is.

A thousand will fall at your one side and ten thousand on the other side, but nothing will come near you.

We must stand on Psalm 91 that He will hide us and protect us when all darkness breaks forth.

We were praying over protection over printing the books for the prison project.
I saw angels in surrounding us in a circle.

I could see the angels very clearly and I saw that there was an embossed head of a lion on each of the angel’s breastplates.

We were praying and Warren started to get loud in #TPW with Neil, the heads of the lion started to glow and the louder they got the brighter the breastplates got.

When the darkness comes to infiltrate into the circle, I saw the light that was coming off the breastplate was dispersing the darkness that was all around us.

The lion heads talks of the Lion of the Tribe of Judah which is the Tribe of Praise. These were the praise angels that God has sent to join us in praise. As TPW is what releases our breakthroughs. We had come together to prays over some so called “impossible situations”
The glory was released as got loud.

So today no matter whether you a quite person or loud person – when we obey the Lord and are loud as He commands us be, He then releases His glory which destroys the darkness trying to infiltrate our camp.

These same angels were letting in “fish” into our midst. These fish can represent people and business deals we are trusting God for.

“this is how you expand My Kingdom on earth”

Loud praises will clear the air from the darkness and oppression.

I saw the eyes of the Lord.

I saw His eyes the way He looks at us is nothing like anyone’s on earth can do.

Then I saw the angels with golden banners running ahead of us.

The sea has opened the impossible has happened, it’s done and its won!
What ever you asked the Lord for thank Him it is done and it is won!

The battle is Won already and is manifested through faith and true faith does loud TPW.

Have you received breakthrough through Loud TPW?

Over to you, have you received breakthrough through loud #TPW?