Listen to the full recording here

I heard the Lord say,

“Don’t lay down on the battlefield”

I was just about to give in to the overwhelming feeling of giving up and resting right there, in the midst of battle, I was weary.

In front of me, I saw a battlefield. Many women of all different backgrounds were engaged in the battle of their lives, many barely holding on, and the battle they fight is unseen to most.

The weapons used against them were mainly words. Like arrows, the accusations stuck to their backs, their legs, their arms and where ever the enemy could get them.

The words spoken were vile and untrue, hurtful and immobilizing.

I am one of them, and the same words had gripped me and had become too much for me, my emotions assaulted, and all I wanted I to lay down for a bit…right there.

While the fierce battle rages, the only way “out” is to plough through into victory.

in this battle, Jesus wins

I looked around and saw many of their faces, overwhelmed and barely hanging on, tear-stained, dusty and dirty, but above all, determined.

They have been attacked from all sides, and plenty of times, the enemy tried to stop them.

and then I heard:

“remind them! remind them of how I have – and am going to – use them. Not just the women of the scriptures, but they themselves!”

And then I realized how much we as women need to hear each other’s testimonies of how the Lord has used us.

These are the stones – the testimonies – of the modern day women like the ones we know.

As these words settled in my heart, I again saw the battlefield.

I saw some of the ones on the front lines were the ones under greatest assault. They were the ones heading up divisions of the army, leading specific areas of battle, and their wounding was much deeper.

“oh weary women of the battlefield” 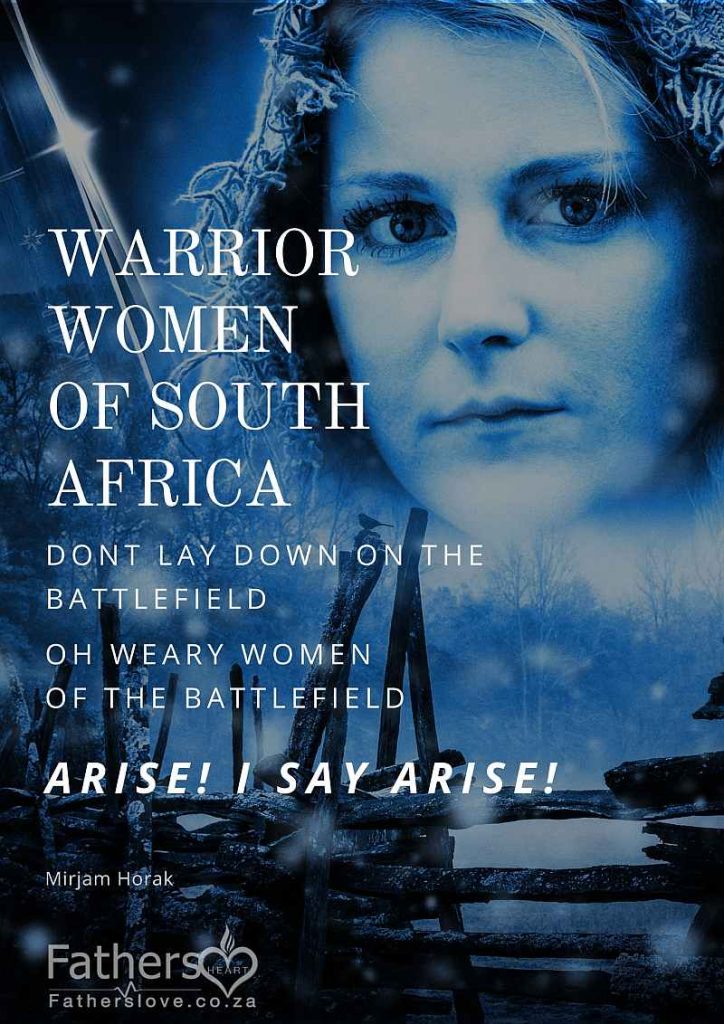 And suddenly something in what I was seeing shifted. I could now see the battle these women in South Africa were in, was against strongholds of religion, and sexism.

These strongholds seek to silence the voices of women who have been anointed and mandated by God to speak, to pray, to intercede, to prophecy.

The battle and the attack on them manifests in the words spoken against them.

I heard the cry of the Lord,

“Oh that their voices be heard”

This battle is against a stronghold that has been there for many generations, it determines who may speak and who may not.

It wants to silence and to quench. it wants the women to stay in the background while the men position only themselves.

And immediately the sweet presence of Jesus was right there on the battlefield.

Ministering to me in my weakness, healing my feet, my mind, putting back together the pieces of a scattered and shattered, broken heart.

In His hands, He holds it all and His strength flows into the weary women of the battlefield.

Next, I saw the most beautiful picture of women linking arms on the battlefield. Their arms now a chain not easily broken. When one is weak, we rise together in unity and strength.

Yes, we know, we are called as Deborah and Esther, as Anna and Mary, as many of the role models we see in the word of God.

But Father is anointing the modern day women on the battlefield like you and I. To link arms, strengthen one another and rise in unity.

So let the strong Anna meet the weak Deborah on the battlefield.

Right there on the battlefield.

Their eyes are now set on the goal;  the inheritance of the promises over the nation of South Africa.

their anthem is Isaiah 61,

their promise is verse 7

Instead of your shame you  shall  have double honour, And instead  of confusion they shall rejoice in their portion.

Therefore in their land they shall possess double; Everlasting joy shall be theirs. Isaiah 61:7

Their Father’s words to them are;

Arise, shine; For your light has come! And the glory of the Lord is risen upon you.

For behold, the darkness shall cover the earth, And deep darkness the people; But the Lord will arise over you,

And His glory will be seen upon you.
The Gentiles shall come to your light, And kings to the brightness of your rising.
Isaiah 60:1‭-‬3

The cloud of witnesses of women who’ve gone before us are cheering us on as we fight, and we will win!

His glory will be seen, as we press through and do not give up.

Do not lay down on the battlefield.

Do you not know that those who run in a race all run, but one receives the prize?
Run in such a way that you may obtain it.
And everyone who competes for  the  prize is temperate in all things.

Thus I fight: not as one  who beats the air. But I discipline my body and bring it into subjection, lest, when I have preached to others, I myself should become disqualified.
I Corinthians 9:24‭-‬27

The Claw of Racism Removed in South Africa

Praying the Blood of Jesus over South Africa