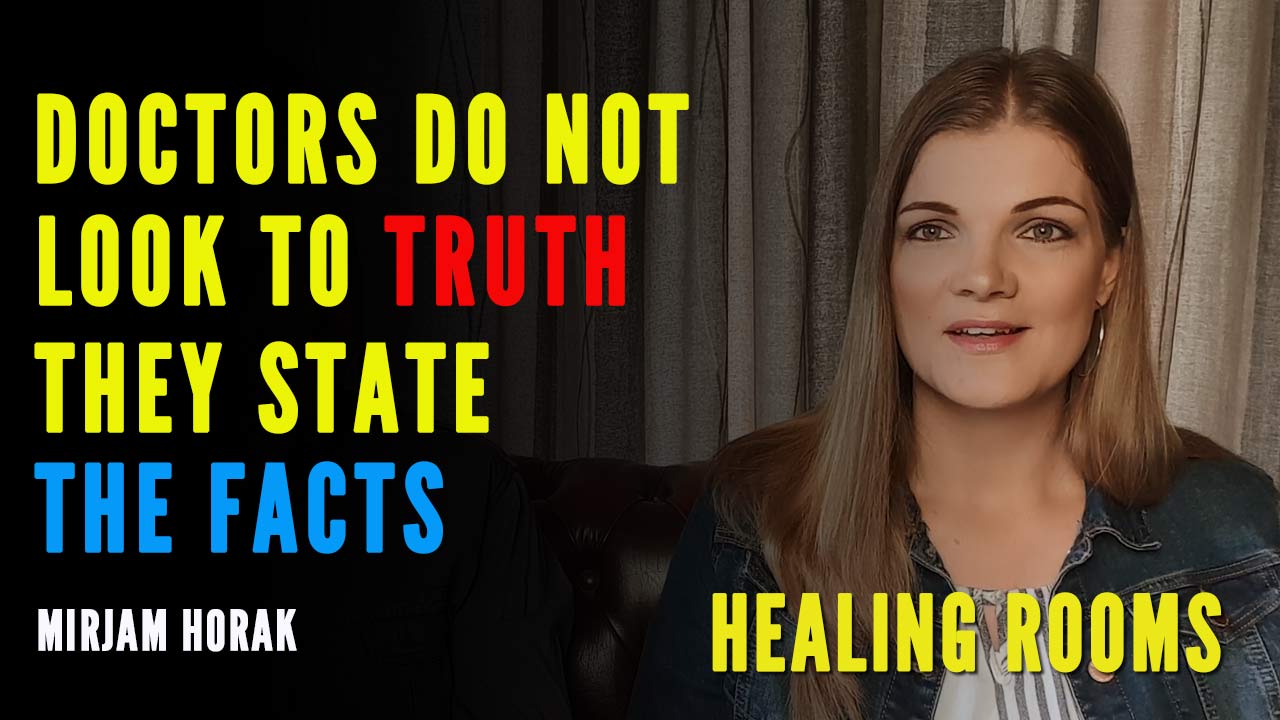 This is an extremely powerful dream that Mirjam had concerning divine healing.

Please watch the videos below

There is so much revelation in this one as the Lord Himself was questioning Mirjam and teaching her how to be healed and break the agreement with hell over her body.

I would recommend you go through this video numerous times to get the full revelation of what the Lord is saying.

He exposes a primary reason why many believers are not yet healed.

Quick Navigation
How does a diagnosis originate?
The word chronic is where the problem begins.
What is a symptom
Don't make your children confess symptoms
The whole scene plays out while I am dreaming
Prayer of repentance
I will show you My salvation
Healing Proclamations
Testimony of Healing

[Watch the Video below]

How does a diagnosis originate?

The Lord began to teach me in my sleep. Here is what I was experiencing Him saying to me. This all happened just before 2 AM.

“How does a diagnosis originate?”

So I began to think, and answered, “it begins with a confession of symptoms”

The doctor then has a look at the symptoms and confesses back to you the infirmity, ailment, or disease.

The doctor begins to test the body for SYMPTOMS not for TRUTH.

The Lord then said to me;

“Doctors do not look to, rely on, or confess the truth. A doctor states facts.”

My thoughts continued and I answered the Lord with, yes, and then the doctor tests your body for symptoms based on your confession of sickness

The Lord then said,

“Confession is made with the Mouth to salvation, and wholeness”

“What is a diagnosis?”

He asked, and so I looked up the definition:

Diagnose: identify the nature of (an illness or other problem) by examination of the symptoms.

“Doctors test for symptoms not truth. Jesus tests for truth not symptoms”

The word chronic is where the problem begins.

Many are diagnosed as a child, I thought. And He said,

“your parents confessed over you your symptoms and declared it to the doctor.

Break the agreement made with the mouth”

What is a symptom

“What is a symptom”,

is the next question the Lord asked me.

So I again, looked up the definition when I woke up.

Symptom is a physical or mental feature which is regarded as indicating a condition of disease, particularly such a feature that is apparent to the patient.

an indication of the existence of something, especially of an undesirable situation.

How is a diagnosis made?

Was the next question that He asked.

I said, "a diagnosis is made on the confession of symptoms"

So I looked that up too.

Clinical diagnosis. A diagnosis made on the basis of medical signs and reported symptoms, rather than diagnostic tests.

"Look up the word "confession" in the bible"

For with the heart one believes unto righteousness, and with the mouth confession is made unto salvation. Romans 10:10

The word salvation in Greek also means; deliverance, preservation, safety, deliverance from the molestation of enemies, Messianic salvation, salvation as the present possession of all true Christians.

The word mouth used here also means; the mouth, as part of the body: of man, of animals, thoughts of a man’s soul find verbal utterance by his mouth, the “heart” or “soul” and the mouth are distinguished, the edge of a sword.

“Confession is made unto, He asked….Salvation, I answered.”

The word confession in Greek also means;  to say the same thing as another, i.e. to agree with, assent, to concede, not to refuse, to promise, not to deny, declare, to admit or declare one’s self guilty of what one is accused of, to profess, to declare openly, speak out freely, to praise, celebrate.

Let us hold fast the confession(same word as above) of our hope without wavering, for He who promised is faithful. Hebrews 10:23

Don’t say to them, Ah what is wrong??

The Lord now sounded firm, and instructed me to not agree.

““What are you? Are you not a mouthpiece? Why do you declare that which is not?” He asked.”

The whole scene plays out while I am dreaming

Now I was wide awake, and I felt so very small. I began to see the significance, or having someone declare with their mouth what their symptoms are.

In my dream I’d seen the whole scene play out.

I have not before experienced the Lord speaking with me in this way in my sleep. It was wonderful, but it was full of awe and the fear of the Lord.

The seriousness of what He was saying to me, hit me very deep.

I began to see my calling, on my mouth, in my dream.

I don’t know how else to describe that but I could see it on my mouth. And then I saw, the power of agreement as a child, and as a young adult when I was re diagnosed at 15 and again at 18 after having moved to Amsterdam.

I did not know better at this time and I had not been taught these things, but better is required of me now, and of my children in my teaching and speaking with them.

I was diagnosed with I believe bronchitis. I was treated for this and over time symptoms became less.

At age 15 and 18, I had gone to the doctor myself and with my mouth confessed the symptoms.

The deal was sealed when the doctor agreed with what I had verbalized as this sickness we now call COPD.

In my dream I saw the power of this agreement and because of my calling to SPEAK, the words I say with my mouth can be declaration without me realizing it.

Truly life and death is in the power of our tongues, even more so when we are called as mouthpieces.

I was shocked at the words the Lord spoke when He said,

What are you? Are you not a mouthpiece?

Why do you declare that which is not?

I realized I cannot just speak.

“I am responsible for what comes out of my mouth.

I am not to agree with diagnoses and symptoms and infirmities. IT IS NOT.

My declaration as a mouthpiece ought to be, IT IS NOT!”

Lord I repent for the confessions of infirmities I have made over myself.

I repent for agreeing first of all with symptoms.

I repent for taking these symptoms to a doctor and not to You.

I repent for confession my symptoms to a doctor and not to You.

I repent for agreeing with the doctor, and gladly receiving medication so I could find relief.

I repent for agreeing with their diagnose.

I repent for confessing to others that “I have asthma”, or “bronchitis and pneumonia is worse for me, because of asthma”.

I repent for saying these things with my mouth.

I repent for declaring things that are not.

I repent for looking up symptoms instead of looking up the Word of God.

I repent for not running to You first but seeking human compassion and a diagnose.

I now break off the agreements I have made with my mouth.

I declare and decree that I am symptom free, that I am healed, that this sickness is not my portion.

I break the agreement I made in my thoughts and in my heart, and I declare and decree that I am healed, I am whole, and made new today.

As I prayed this prayer, I felt the Lord say to me,

I will show you My salvation

He continued, and said:

He then gave me the following verses,

Exodus 15:2 The Lord is my strength and song,

And He has become my salvation;

He is my God, and I will praise Him;

My father’s God, and I will exalt Him.

Psalm 50:23 Whoever offers praise glorifies Me;

And to him who orders his conduct aright

I will show the salvation of God.”

And show him My salvation.” 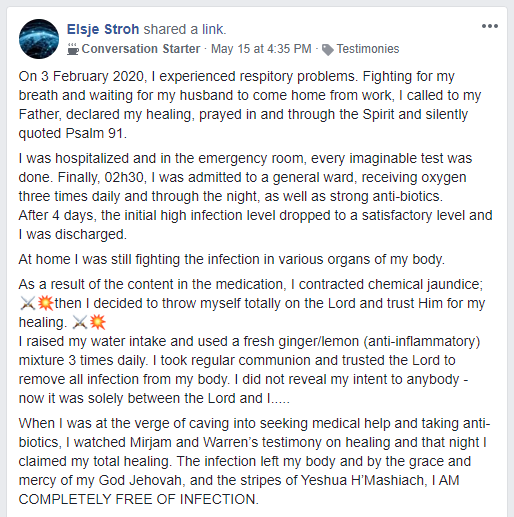 Valleys have rivers, look for them

The 31st of October is not halloween; it is The Global Day of TPW

Podcast #005: Expectancy The Door of Glory Awaits You

Freedom from the Two prisons of Offence

Having the Emotions and Senses of God

Is there any balm in Gilead?