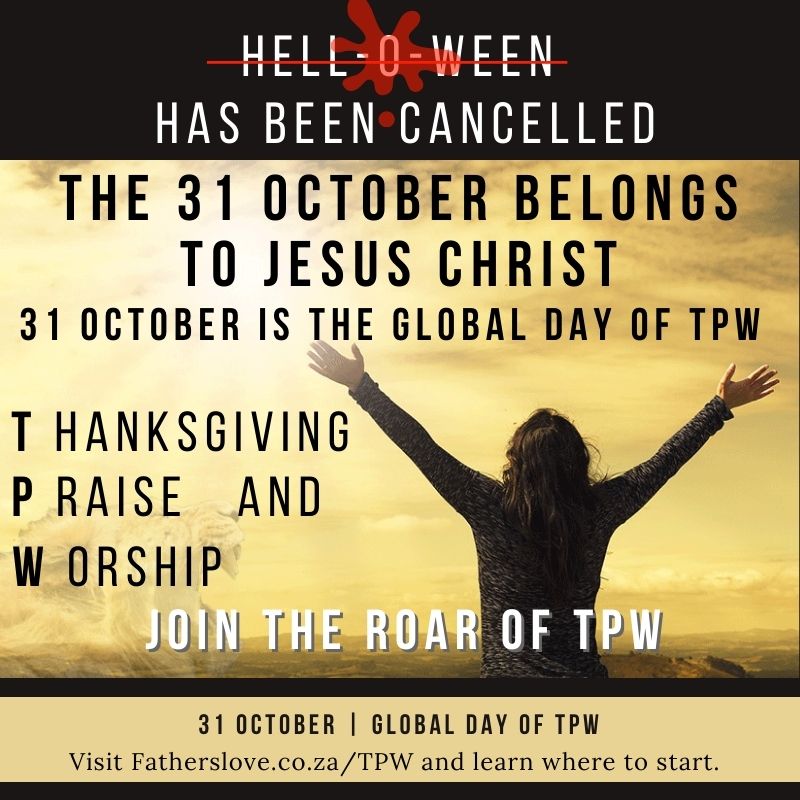 The 31st of October belongs to Jesus Christ

It is not “halloween”, it is The Global Day of TPW (THANKSGIVING – PRAISE – WORSHIP)

Which of the 365 days of the year did the Lord not create?

How come we allow the enemy to claim certain days of the year?

Surely every day was made by Him?

How come we allow the enemy to name days for his own purposes?

Just because the enemy has attached his works to certain days does not mean that they belong to him.

The devil is a thief and a liar.

Lets us take every day back.

We cannot allow the enemy to steal any day of the year.

Find out why Christians should not celebrate halloween.

One of the popular heroes of Halloween, Count Dracula (or Vlad the Impaler), was also a real person. Dracula lived from 1431 to 1476. During his six-year reign, Count Dracula massacred over 100,000 men, women and children in the most hideous ways.

He devised a plan to rid his country of the burden of beggars, the handicapped, the sick and the aged by inviting them to a feast at one of his palaces.

He fed them well and got them drunk.

Then he asked them: “Do you want to be without cares, lacking nothing in the world?” When his guests yelled “Yes!” Dracula ordered the palace boarded up and set on fire.

No one escaped this original “house of horror.”

“…teach My people the difference between the holy and the unholy and cause them to discern between the unclean and the clean.” Ezekiel 44:23

“Train up a child in the way he should go, then when he is old he will not depart from it.” Proverbs 22:6

“That whoever causes one of these little ones who believe in Me to sin, it would be better for him if a millstone was hung around his neck and he were drowned in the depths of the sea. Woe to the world because of offenses! For offenses must come, but woe to that man by whom the offense comes!” Matthew 18: 6-7

“Let love be without hypocrisy. Abhor what is evil. Cling to what is good.” Romans 12:9

“Therefore, let us cast off the works of darkness and let us put on the Armour of Light.” Romans 13:12

“Do not be unequally yoked together with unbelievers. For what fellowship has righteousness with lawlessness? What communion has light with darkness? And what accord has Christ with Belial? For what part has a believer with an unbeliever? And what agreement has the temple of God with idols? …Therefore, come out from among them and be separate says the Lord. Do not touch what is unclean and I will receive you.” 2 Corinthians 6:14-17

“And have no fellowship with the unfruitful works of darkness but rather expose them.” Ephesians 5:11

“Now the Spirit expressly says that in latter times some will depart from the Faith, giving heed to deceiving spirits and doctrines of demons, speaking lies and hypocrisy, having their own conscience seared with a hot iron.” 1Timothy 4:1-2

“Therefore, submit to God. Resist the devil and he will flee from you.” James 4:7

“Pure and undefiled religion before God and the Father is this: to visit orphans and widows in their trouble and to keep oneself unspotted from the world.” James 1:27

“Beloved, do not imitate what is evil, but what is good. He who does good is of God, but he who does evil has not seen God.” 3 John 11

Hear from an Ex satanist

If we agree with the enemy that the 31 of October is , then we are giving him authority.

It is time to seize the day!

We cannot say it doesn’t belong to the devil and do nothing about it.

We should come in the opposite spirit and bring God glory on the 31 October, the Global Day of #TPW – Thanksgiving – Praise – Worship

Angels laughing over Halloween as the enemy has been tied up

Two days before I sent out the post about Halloween been cancelled and replaced by the Global Day of TPW Byrone Rubenstein had this dream.

When he received my message he replied via WhatsApp with his dream which he hadn't shared with anyone yet.

This is very powerful word that we need to believe and pray into existence and make sure we stand with Heaven on the 31 October in TPW ( Thanksgiving, Praise and Worship)

Angels laughing over Halloween as the enemy has been tied up

I dreamt of the Angels rolling around in laughter.

They were laughing at the plans of the enemy in the courts of heaven concerning Halloween as demons were being tied up by other angels so they could not activate their mandate around this time of year.

I saw lots of rain falling on the earth and a supernatural peace on people as they went about their everyday life the goodness of God started to intensify.

Things started to break loose off of people.

Past prayers and current prayers were been put together like puzzle pieces activating a great move of God in the earth.

Can you hear it?

Can you see it?

I saw trumpets blowing in worship even nature worshipping in all their might as a mighty wave is being released!

31 October is going to be an epic occasion, a setup for things not yet seen on the earth, it’s an exciting time to be alive!

Psalm 37:12–13
The wicked plots against the just, And gnashes at him with his teeth.

The Lord laughs at him, For He sees that his day is coming.

Psalm 2:4 He who sits in the heavens shall laugh; The LORD shall hold them in derision.

It’s the failure of the plans of the enemy and the tearing down of the strongholds of the spirit of mockery over our nation that will lift.

That is why the goodness of God will intensify in this time.

The lies that many are trapped in will be exposed.

People will walk in their true identity as victor in Jesus in his identity.

2 Corinthians 10:4–6
For the weapons of our warfare are not carnal but mighty in God for pulling down strongholds,

casting down arguments and every high thing that exalts itself against the knowledge of God, bringing every thought into captivity to the obedience of Christ,

and being ready to punish all disobedience when your obedience is fulfilled.

Then I will give you the Rain for your land in its season (Revival) ,the early rain and the latter, that you may gather in your grain your new wine and your oil and I will send grass in your fields for your livestock that you may eat and be filled

• Oil is the anointing

Seeing prayer as a puzzle reminded me of all the prayer meeting we have had overtime especially the "It’s Time" prayer gathering.

The picture of unity came to mind every prayer has its purpose and unique power in the bigger scheme of things.

Worship is a key to this victory

This is God’s battle, there is a time to go to war but it’s as if God wants us to focus on worshiping him and praising him He will war this battle for us our focus is intimacy with him in Thanksgiving, Worship and Praise

There is a testimony in the word of the “worship team” going before the army and when they got to the place of war the enemy took themselves out in confusion and the battle was won even before they got there. See 2 Chronicles 20

Many have prayed and have hold onto the hope that their prayers will be answered this is a reminder to not cease but continue God is putting together the prayer puzzle of Revival.

We co -labour with God through Prayer

1 Thessalonians 5-17 We must pray without ceasing

God wants to encourage us to keep on Praying and Worshipping watch this space!

JOIN THE ROAR OF TPW

Learn how to pray and release the ROAR of TPW here

We need to get radical and violent about our TPW. He is giving us the AIR!

The enemy has been ruling the air, we need to take it back through consistent TPW.

CALL to ROAR! Steps to take back the air and the day every 31 October

We must now repent on behalf of our cities for the witchcraft, bloodshed, sacrifices and fear that is being released over our communities and nations by enemies army.

At this time of the year the enemy is mobilizing millions of people including children to build alters through agreement, blood sacrifices, witchcraft etc.

These altars in our cities can only be broken down through repentance by bring the Blood of Jesus to bear on the city see 1 John 1:9

Let us determine that every 31 October is a day to glorify Father, Son and Holy Spirit on earth.