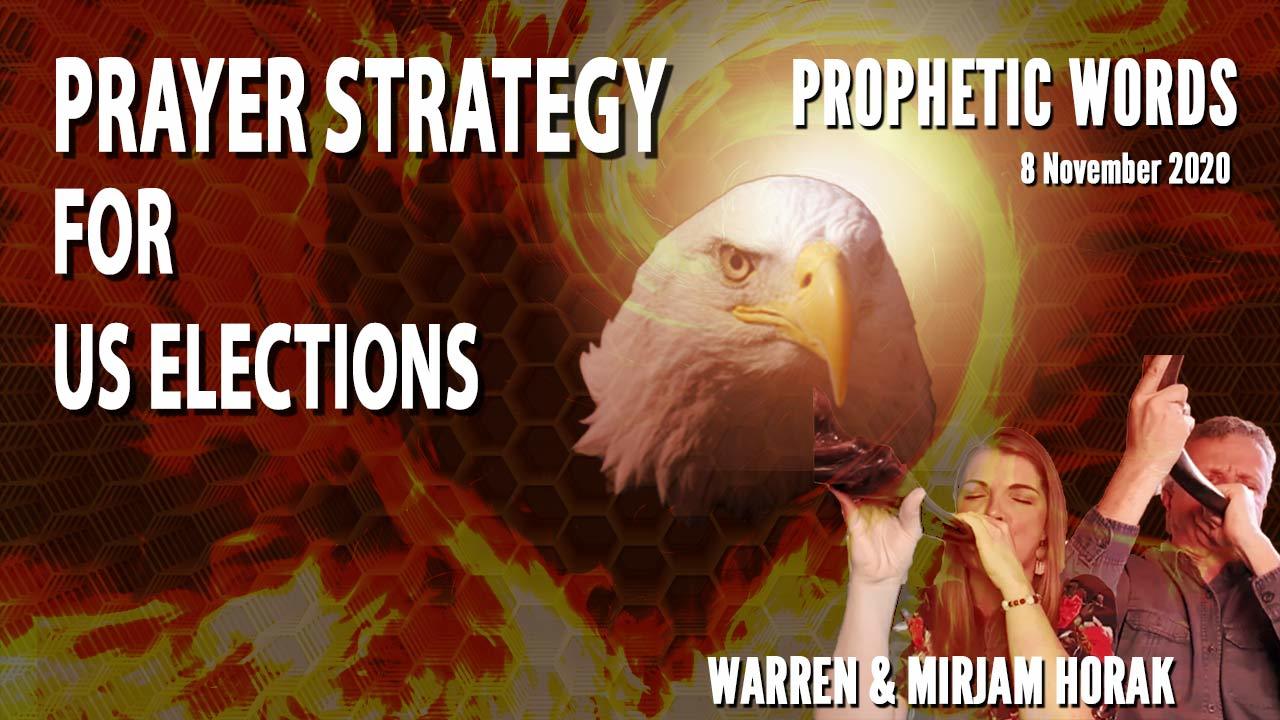 What should our reaction be? What is His Prayer Strategy for Elections?

He has a plan of action for the Church right now. We need to look at His Prayer Strategy for Elections and not what the media is saying

This is a very important word and strategy for the Watchmen across the nations.

Table of Contents
Do Not Listen To The Prophets of Baal in the Media
Prayer Strategy for Elections in the US for His Watchmen.
1. Know His ways are not our ways
2. Only believe and Make War with prophecies
Brother Sadhu's word for the USA Elections and Trump
Veronica West - Word for USA and Trump
3. Turn back to Him and repent,
4. Release the arrows of light and blood into the strongholds of the enemy.
5. Speak to the mountain:
6. Daily proclaim the Blood of Jesus over the White house.
7. Pray in Tongues continually.
8. TPW - Thanksgiving, Praise and Worship.

Do Not Listen To The Prophets of Baal in the Media

The Mainstream Media are the modern-day prophets of baal.

Who works in alignment with jezebel who controls through fear and intimidation.

Those who know Jesus do not listen to or follow the voice to the stranger.
Do not allow your heart to listen to their "projections"

Jesus says to you America...

"Only Believe and you will see My Salvation"

"Stand up and ROAR this is your final hour"

Listen to His Voice - which brings peace, truth, hope, faith and love.US Elections - What now?

What should our reaction be?

He has a plan of action for the Church right now

This is a very important for the Watchmen across the nations.

Prayer Strategy for Elections in the US for His Watchmen.

1. Know His ways are not our ways

The way of the Cross for us His Body now

A Moment of Apparent Defeat - An Eternal Victory

1 Kings 18:20–21 So Ahab sent for all the children of Israel, and gathered the prophets together on Mount Carmel.

21 And Elijah came to all the people, and said, “How long will you falter between two opinions? If the LORD is God, follow Him; but if Baal, follow him.” But the people answered him not a word.

Is his hand shortened that it cannot save?

Indeed with My rebuke I dry up the sea, I make the rivers a wilderness; Their fish stink because there is no water, And die of thirst.

3 I clothe the heavens with blackness, And I make sackcloth their covering.”

4 “The Lord GOD has given Me The tongue of the learned, That I should know how to speak A word in season to him who is weary. He awakens Me morning by morning, He awakens My ear To hear as the learned.

5 The Lord GOD has opened My ear; And I was not rebellious, Nor did I turn away.

6  I gave My back to those who struck Me, And My cheeks to those who plucked out the beard; I did not hide My face from shame and spitting.

8  He is near who justifies Me; Who will contend with Me? Let us stand together. Who is My adversary? Let him come near Me.

9 Surely the Lord GOD will help Me; Who is he who will condemn Me? Indeed they will all grow old like a garment; The moth will eat them up.

10  “Who among you fears the LORD? Who obeys the voice of His Servant? Who walks in darkness And has no light? Let him trust in the name of the LORD And rely upon his God.

11  Look, all you who kindle a fire, Who encircle yourselves with sparks: Walk in the light of your fire and in the sparks you have kindled— This you shall have from My hand: You shall lie down in torment.

2. Only believe and Make War with prophecies

Stand in faith and make war with His prophecies

Ephesians 6:10–18 Finally, my brethren, be strong in the Lord and in the power of His might.

11  Put on the whole armor of God, that you may be able to stand against the wiles of the devil.

12 For we do not wrestle against flesh and blood, but against principalities, against powers, against the rulers of the darkness of this age, against spiritual hosts of wickedness in the heavenly places.

13  Therefore take up the whole armor of God, that you may be able to withstand in the evil day, and having done all, to stand.

14  Stand therefore, having girded your waist with truth, having put on the breastplate of righteousness,

15 and having shod your feet with the preparation of the gospel of peace;

16 above all, taking the shield of faith with which you will be able to quench all the fiery darts of the wicked one.

17 And take the helmet of salvation, and the sword of the Spirit, which is the word of God;

Know this that every sure word of prophecy given to you and to the nations will be contested by the demonic realm and their false priests - Fake news is filled with prophets of baal.

President Trump was called to expose and call them out.

God is will bring forth His judgements on these organizations you will see it.

The Truth will arise and expose and destroy the lies of the enemy.

The battle is in the Gates - we stand in the gates and fight.

Make war with the promises and words of prophecy given to His prophets - Sadhu, James Goll, Tracy Cook, Kevin Zedai, Kat Ker, Veronica West and many others.

The Lord said that, Trump will Triumph via Veronica West and Sadhu.

Brother Sadhu's word for the USA Elections and Trump

It is clear that It is Gods will and plan for Trump to win this election and serve the USA for another 4 years.

1 Timothy 1:18–19 This charge I commit to you, son Timothy, according to the prophecies previously made concerning you, that by them you may wage the good warfare,

19  having faith and a good conscience, which some having rejected, concerning the faith have suffered shipwreck,

3. Turn back to Him and repent,

4. Release the arrows of light and blood into the strongholds of the enemy.

against my president Trump in this election.

Psalm 144:6 ~ Flash forth lightning and scatter them; Shoot out Your arrows and destroy them.

I now release this arrow of light and blood.

5. Speak to the mountain:

Mark 11:23 For assuredly, I say to you, whoever says to this mountain, ‘Be removed and be cast into the sea,’ and does not doubt in his heart, but believes that those things he says will be done, he will have whatever he says.

Reject and actively resist and pull down the words of the enemy.

The words of the prophets of baal that go against Gods word and will from the USA.

Do not argue only look to Him and hear His voice.

John 10:3–5  To him the doorkeeper opens, and the sheep hear his voice; and he calls his own sheep by name and leads them out.

4 And when he brings out his own sheep, he goes before them; and the sheep follow him, for they know his voice.

5 Yet they will by no means follow a stranger, but will flee from him, for they do not know the voice of strangers.”

We now resist and cast into the see this mountain of theft and deception in Jesus Name.

6. Daily proclaim the Blood of Jesus over the White house. 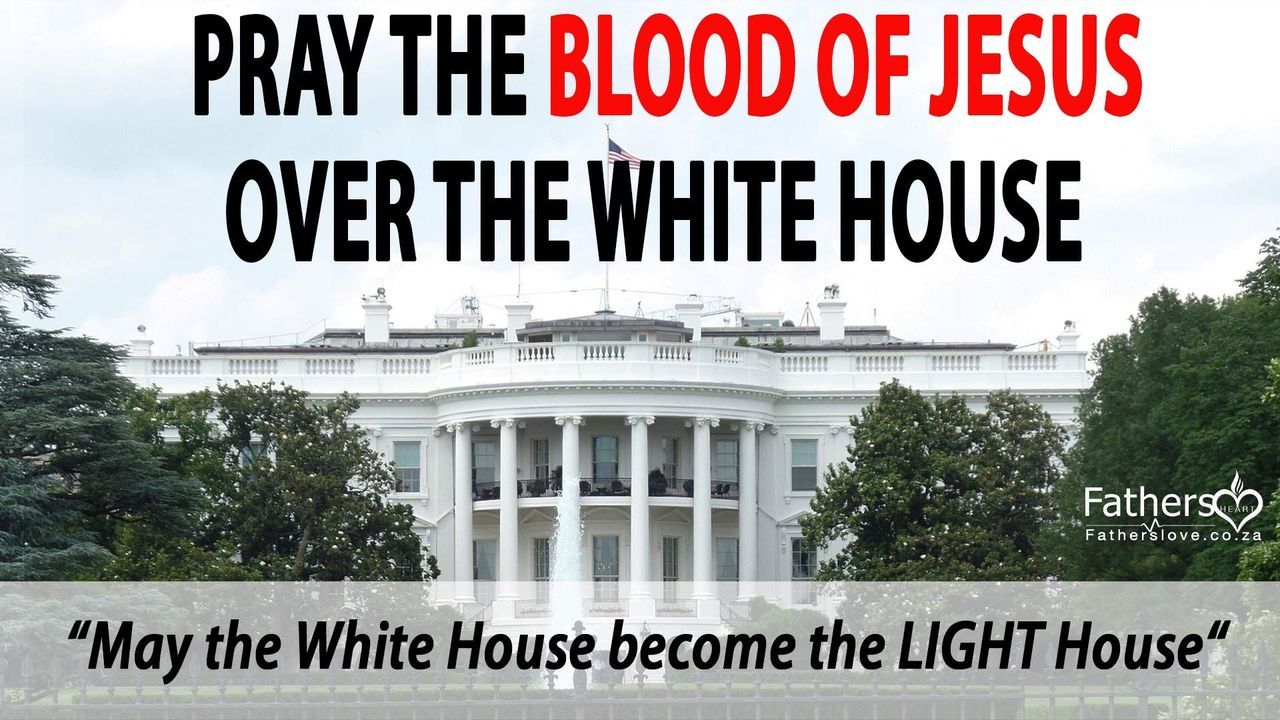 Praying the Blood over the US 2020 Elections

Daily Thanksgiving and Praise and Worship

The Scroll of Restoration