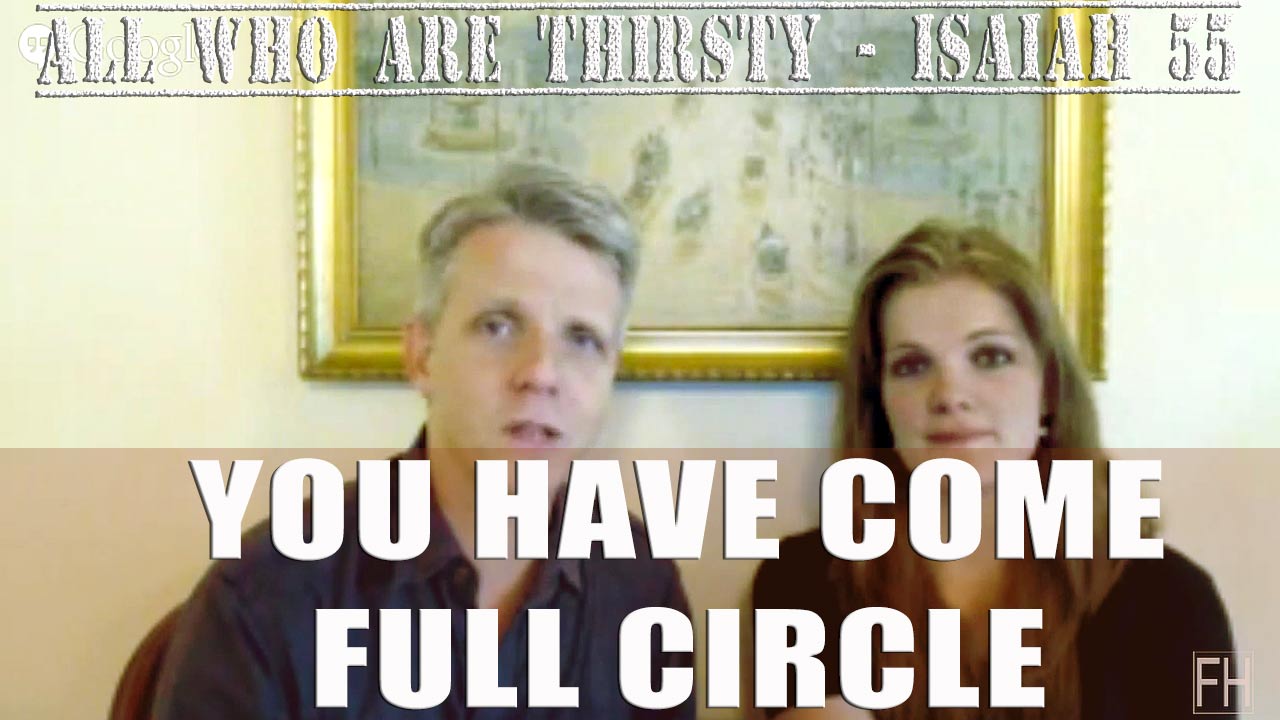 You Have Come Full Circle – Webinar #36

It Is That Time

In His Kingdom there are times and seasons. What He is saying now is that the season has come full circle. This means all that has needed to happen as already past and that the circle of time is completed.

It is like the clock has now struck the hour and the time has now arrived for that which He has promised you.

This word is based on a vision Mirjam got as we were gathered at the table. There was such a strong presence of His love and joy and excitement on each one of us. She saw the Lords finger go around the table in a circle and He said,

You have come full circle.

Then the line He drew around us started to expand.

All I can say is that from that time and day on 1 May 2015 some major things have shifted into place and His Kingdom is rapidly expanding in all directions.

I believe He is saying it is time to let go the past and embrace His words over our lives for He will bring these things to pass.

Although there have been many delays for the release of His promises in our lives the enemy is unable to stop them.

A delay is not a denial but just makes the breakthrough that much greater in the end.

So let us rejoice and be glad as He releases heaven on earth.

The revelation continues, I was reading a message this morning 1 September 2015 that was released by Jennifer Lecler called – “GOD IS BRINGING DIVINE RECONNECTION’S FULL CIRCLE IN THIS HOUR”

On the 1 May 2015 – the first time Alison  joined us from Australia for our Divine encounter and Webinar – God showed Mirjam the circle around the table and she saw the circle increase. She heard, “you have come full circle” see word and video above.

At the same meeting Alison also saw a vision of chariot wheels moving ahead rapidly. At the time I never saw that chariot wheels are also circles and now this is double circle on its side moving rapidly all over the earth. This was a sign for us all. Lets tap into the new level and full circle.

Well since the 1 May God has catapulted us into a whole new dimension in ministry all over the place as He send us by His grace and power.

In her article above Jennifer refers to a word the Lord gave Dutch Sheets from the USA about Full Circle. I have been watching this message it is quite astounding  to the number and depth of confirmations in this message. Confirming many words the Lord has given us over the last 9 years or more. This message not only confirms but goes way beyond and is one of the most powerful messages I have heard.

When the Lord started these gatherings in 2012 the main word was around thanking God for our stones – giving testimony. Which is what we have been doing ever since each time we gather. The Lord has continued to work miracles amongst us. Wait until you hear what Dutch Sheets says about this.

These six videos below are a must watch as there is so much revelation on the cull circle and the times and seasons of God.

Dutch Sheets says in this teaching:

The very same anointing is released when we repeat God’s testimonies and remind Him of what He has done in the past.

This is exactly what the Lord showed me happens in 2012 when we thank Him for what He has done in the past. Read how to use your stones to make a way and kill your Giants.

Dutch Sheets also covers the staff and David and goliath. Amazing this confirmation as the Lord sent Mirjam to South Africa to release the Staff of the Lord.

Full Circle at a Higher Level by Dutch Sheets

Over to you, can you see His hand moving time for you?

Suddenly Many Will Emerge Above The Ground – Webinar #37